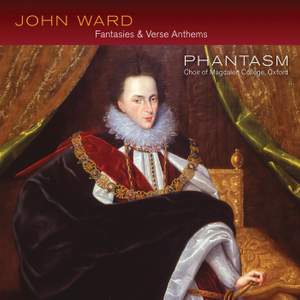 Phantasm is simply the best viol consort around...the all-male choir...has some good individual singers, at their best in the ingenious Down Caitiff Wretch and the exuberant This is a Joyful,... — BBC Music Magazine, February 2015, 4 out of 5 stars More…

Ward, J: How long wilt thou forget me, O Lord

Ward, J: This is a joyful, happy holy day

The Choir of Magdalen College, Oxford join Phantasm to perform Ward’s verse anthems which contain an ever-shifting kaleidoscope of textures and generous word painting amidst a polyphonic swirl of viols.

This recording is a fitting tribute to John Ward, whose efforts have been rediscovered in our own time and whose mellifluous music deserves a closer look.

Phantasm’s illustrious recording career has resulted in the viol consort being repeatedly recognised at the Gramophone Awards with a one Award and several ‘Finalist’ nods to its name.

Phantasm’s debut on Linn, ‘Ward: Consort music for five and six viols’ was named a ‘Choice’ recording by BBC Music Magazine whilst also receiving many five and four star reviews.

Phantasm has been widely acclaimed for its previous Linn recordings; ‘Byrd: Complete Consort Music’ was named BBC ‘Disc of the Month’ and ‘Lawes: Consorts to the Organ’ was nominated for both BBC and Gramophone Awards.

The award-winning ensemble has been applauded across the globe for its moving performances and is recognised as the most exciting viol consort active on the world scene today.

Critics have described their performances and recordings as 'intoxicating', 'revelatory', 'electrifying', 'interpretations pervaded by a truly burning spirit'.

The quartet’s international members (from Britain, Finland and the US) are based in Oxford and have toured extensively throughout Europe, North America, and East Asia. They are joined by Emily Ashton and Christopher Terepin for this performance.

Phantasm is simply the best viol consort around...the all-male choir...has some good individual singers, at their best in the ingenious Down Caitiff Wretch and the exuberant This is a Joyful, Happy Holy Day.

The treble soloists are particularly fine, but all excel in aptly contrasted ways, from plaintively diffident tenor to well-nourished bass.

Phantasm play with their customary verve, just occasionally preferring energy to rhythmic steadiness but never losing the shape of the relatively short fantasias. For the verse anthems, Daniel Hyde opts for a slightly steadier approach...The current Magdalen choir has a range of marvellous voices used for the solos.

Henry [Prince of Wales] spent a brief spell at Magdalen, Oxford, so it’s appropriate that the college choir should join with resident consort Phantasm to record, with luminous clarity, some mellifluous examples of the form by John Ward...His attractive word painting is vividly realised here.