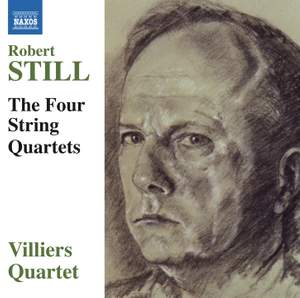 Robert Still’s four string quartets vividly encapsulate his compositional career. The first two, of which No. 1 was first performed in 1948, display an early inclination towards folk-song and preclassical models, while Nos. 3 and 4, written during the 1960s “without key”, reflect his later change towards a continental European-influenced method of composition that can be summed up by the abandonment of writing in a tonal style. These world première recordings owe a considerable debt to the editorial expertise of James Dickenson, leader of the Villiers Quartet, who prepared the performance material from the original scores.

No praise can be too high for these sublimely articulated and concentrated readings by the Villiers Quartet, for whose leader, James Dickenson, the whole project was very much a labour of love. Admirable sound and balance too.

This young ensemble relishes the challenges here – and at Naxos’s price this should be snapped up.