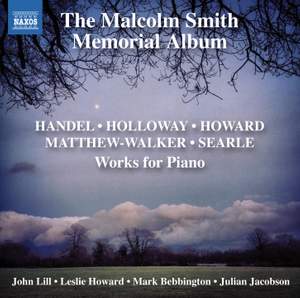 This unique recording owes its existence to Malcolm Smith (1932-2011), who was a leading and popular figure in London’s musical life. He was a stalwart of numerous organisations and festivals, a friend of the greatest composers and a tireless advocate of British music. A Vice President of the British Music Society, Smith bequeathed a sum of money to facilitate this recording, which includes Robin Holloway’s six-handed Grand Heroical March, Leslie Howard’s Sullivan-inspired Ruddigore Fantasy, and Humphrey Searle’s Sonata, described by The Times in 1951 as ‘suffused with darkling, elegiac poetry and commanding thought’.

If ever London’s classical music public had a “character” in its midst, it was the lavishly mustachioed Smith (1932-2011), long linked to Boosey & Hawkes, the London Symphony Orchestra’s Friends and British-music-promoting organisations of every kidney. He left funds for this amiable disc