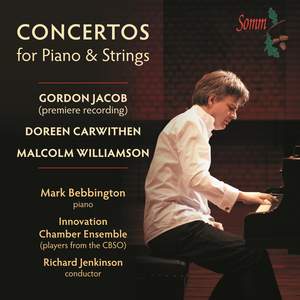 Jacobs's compact Concerto No. 1 of 1927 starts us off with a tinkle, a crash, neo-classical fingerwork, and a sprinkling of slightly crunched harmonies...In its first recording, British devotee... — BBC Music Magazine, March 2015, 3 out of 5 stars More…

Mark Bebbington's much acclaimed collaboration with SOMM now yields new riches in this important release featuring three exhilarating works for piano and string orchestra, including the world premiere recording of Gordon Jacob's Concerto No. 1. He is partnered by the virtuoso Innovation Chamber Ensemble (ICE), founded in 2002 by the principal string players of the CBSO, and the conductor and principal CBSO cellist Richard Jenkinson. London-born Gordon Jacob (1895-1984) studied at RCM. He was renowned not only as a prolific and accomplished composer but also an expert on orchestration and composers as different as Vaughan Williams and Noël Coward entrusted him with arrangements of their music. His Concerto No. 1 (1927) was first performed by Arthur Benjamin with the Queen's Hall Orchestra under Sir Henry Wood. Like the other two works on this disc, it combines moments of high virtuosity and rhythmic excitement with passages of deeply-felt poetry. Malcolm Williamson (1931-2003) was born n Sydney where he studied composition and horn at the City's Conservatorium of Music. In 1950 he moved to London and in 1975 he succeeded Sir Arhur Bliss as Master of the Queen's Music. Williamson wrote four piano concertos, of which No. 2 is the most immediately accessible. Its three movements are thematically connected but display a wide variety of moods and stylistic affinities, from Stravinsky to Gershwin. The upbeat finale includes brief allusions to the conga and the waltz which bring the concerto to an effervescent conclusion. Doreen Carwithen (1922-2003) studied cello, harmony and composition at RAM, where one of her teachers was the composer William Alwyn. She composed the scores for over thirty films. She married her former teacher and became known as Mary Alwyn. Her most substantial orchestral score, the Piano Concerto, was completed in 1948 and appeared in a Promenade Concert with Iris Loveridge as soloist. The outer movements are mainly vigorous but with quieter, more romantic passages providing contrast, while the beautiful slow movement assigns a prominent role to a solo violin.

Jacobs's compact Concerto No. 1 of 1927 starts us off with a tinkle, a crash, neo-classical fingerwork, and a sprinkling of slightly crunched harmonies...In its first recording, British devotee Mark Bebbington tackles the piece with expected relish...Malcolm Williamson's Second Concerto (1960) offers more pleasures still.