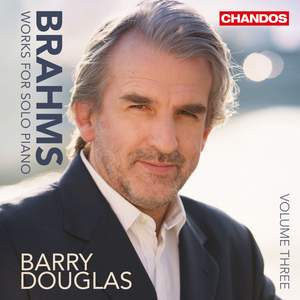 I can only wonder at his Brahms, which is superbly masterful in technique and musicianship (an indissoluble blend). There is no trace of distortion or egocentricity...Instead you hear an unfaltering... — Gramophone Magazine, January 2015 More…

Brahms: Theme and Variations in D Minor, Op. 18b

No. 1, Intermezzo in B Minor

No. 3, Intermezzo in C Major

No. 5, Intermezzo in E Minor

Barry Douglas returns for the highly anticipated third volume in his series devoted to Brahms’s solo piano music, the first two volumes having been met with widespread critical acclaim. Of Vol. 2, International Record Review wrote, ‘this is indeed Brahms playing of the utmost integrity and authority... this cycle looks set to become a benchmark’.

The selected Intermezzi performed here come from the collections of short piano pieces which Brahms published in 1892 – 93, his last works for piano. A sense of wistful, melancholic reflection pervades these exquisitely crafted masterpieces of Brahms’s late maturity.

Composed at the other end of his life, at the age of twenty, the Piano Sonata in F sharp minor is full of a youthful, strident energy. It was among the pieces that, when he heard them privately, convinced Robert Schumann of Brahms’s genius. It was dedicated to Robert’s wife, Clara, who was to remain a key figure in Brahms’s life. Indeed it was Clara who, having heard the movement, begged Brahms for a piano transcription of the noble Andante from the String Sextet in B flat major, the Theme with Variations in D minor heard here.

Brahms’s set of sixteen Waltzes, Op. 39 were originally conceived for piano four hands and were arranged, by popular demand, for solo piano soon after, in 1867. They capture the sense of joyful abandon often associated with the genre but their romanticism and nostalgia are uniquely Brahmsian.

I can only wonder at his Brahms, which is superbly masterful in technique and musicianship (an indissoluble blend). There is no trace of distortion or egocentricity...Instead you hear an unfaltering commitment to exclusively musical matters and the results are as moving as they are exemplary.

The performances are generally first-rate, with a real Brahmsian mix of toughness and slightly gruff charm about them; Douglas is at his best in the early Sonata, but his account of the jewel-like intermezzos – Clara Schumann described the first of Op 119 as a “grey pearl” – are most subtlely coloured too.