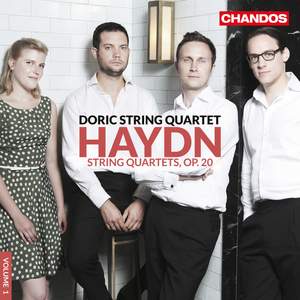 The Doric Quartet, making sparing use of vibrato, play with much sensitivity. Their slow movements, in particular, are beautifully done...But elsewhere a determination to characterise the music... — BBC Music Magazine, January 2015, 3 out of 5 stars More…

IV. Finale: Fuga a due soggetti

Haydn’s six Op. 20 string quartets are milestones in the history of the genre. He wrote them in 1772 for performance by his colleagues at the Esterházy court and, unusually, not specifically for publication. Each one is a unique masterpiece and the set introduces compositional techniques that radically transformed the genre and shaped it for centuries to come. Haydn overturns conventional instrumental roles, crafts remarkably original colours and textures, and unlocks new expressive possibilities in these works which were crucial in establishing the reputation of purely instrumental music. The range within the quartets is kaleidoscopic. From the introspective, chorale-like slow movement of No. 1 via the terse and radical quartet No. 3 in G minor to the comic spirit of the fourth in D major, each of the quartets inhabits a distinct musical world. For many, this is some of the greatest music Haydn ever wrote.

Playing these seminal works is one of the world’s finest young ensembles, the Doric String Quartet. As well as having already produced a string of acclaimed recordings on Chandos, the group has been widely praised for its live performances of Haydn’s works. The Sunday Telegraph wrote that ‘Haydn and the Doric are a perfect match… Unequivocally, these were performances of terrific panache and perception, seeming to get right under the skin of Haydn’s creative genius’.

The Doric Quartet, making sparing use of vibrato, play with much sensitivity. Their slow movements, in particular, are beautifully done...But elsewhere a determination to characterise the music all too often leads to exaggerated pauses and tempo fluctuations that threaten its coherence.

The musicians of the Doric String Quartet respond with imagination to each fresh idea, bringing into play a lightness of touch, much spirit and — this being Haydn — wit. Above all, they fill the two-disc set with affection for Haydn’s inexhaustible creativity.

Thoughtfulness is uppermost. Allied to precision in articulation is a flexibility in the scansion and shaping of phrases, of notes timed through a remarkable understanding of rubato, of a range of expressive resilience that gives even the smallest of episodes in a long line their own character without distorting structure or disturbing flow.

The spirit and stylistic understanding that the Doric brings to this music is a constant joy, coupled with clarity of articulation, refined but unfussy nuances of dynamics and emphasis, and a thorough appreciation of the instrumental democracy and conversational ease that Haydn established in this music and which made it such a landmark in the art of quartet-writing.