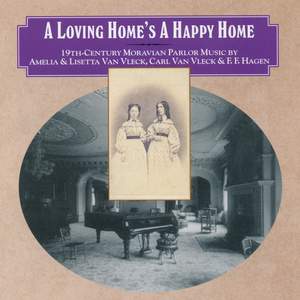 A Loving Home’s a Happy Home

Vleck, A A: Irma Waltz

Vleck, A A: Salem Band Waltz

Vleck, C A: The Hope The Star The Voice

Vleck, A A: The Unknown Soldier Boy

Vleck, A A: My Dear One's Waltz

Hagen: The Grave of My Wife

Vleck, A A: River Waltz

Vleck, A A: Waltz

Vleck, A A: Centennial March

Vleck, A A: The Sky Lark

Vleck, A A: Carolina March

Hagen: Her Last Words at Parting

Vleck, A A: The Rainy Day

Vleck, A A: Lullaby

Vleck, C A: The Watch-Tower Light

Vleck, A A: Colonel Belo's March

Hagen: A Friend in Need Is a Friend Indeed

The Moravian musical heritage is an important piece of American musical and cultural history in that it represents the finest body of music written or performed in America during the eighteenth and early nineteenth centuries. During the eighty years from about 1760 to 1840, American Moravians wrote hundreds of anthems,duets, solo sacred songs, and instrumental pieces, and collected hundreds of others—both printed and hand copied.

The eighteenth and nineteenth-century Moravians considered music as a necessity of life, not as a cultural veneer. Many Moravian clergy and lay people were trained in music by the same composers who influenced Mozart and Haydn; thus they came to the New World fully conversant with the taste and practice of European classicism. Perhaps the most “colorful” and engaging women in Moravian musical history are the three “Van Vleck sisters” of the nineteenth century—Louisa Cornelia Van Vleck (1826–1902), Amelia Adelaide Van Vleck (1835–1929), Lisetta Marie Van Vleck (1830–1914).

Born into a family of musical Moravian ministers spanning several generations, these three women all inherited—and made use of—the musical gifts of their ancestors.

In addition to the music of two of these talented women, this anthology includes a few works by two Moravian male composers of the nineteenth century: Francis Florentine Hagen (1815–1907), who composed the beloved hymn Morning Star and a number of sacred anthems; and Carl Anton Van Vleck (1794–1845), father of the three Van Vleck sisters. Most of the compositions of these four composers were written for very small forces—piano or songs with piano accompaniment. Sixteen solo piano works are interspersed with fifteen works for voices (solos, duos, quartets) with piano accompaniment. This varied collection provides an excellent overview of a hitherto undocumented facet of Moravian music culture—secular works for enjoyment at home—and is thus a valuable addition to the discography of early American music.