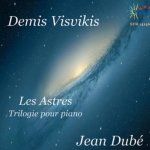 In his early childhood Demis Visvikis started learning the piano with his father - himself a pianist - and went on studying for several years at the National Conservatory in Athens, eventually settling in Paris.

Demis Visvikis has collaborated with many orchestras and groups of contemporary music and has several times received commissions by different organisms like the Greek Ministry for the Arts, the French Guild of Soloist-Artists, the Teacher Training Music School of Paris (Ecole Normale de Musique de Paris). Since 1989, his works have been parthly published by Éditions Eschig, by Éditions Billaudot and by Éditions Alphonse Leduc.

Since 1991, he has been a permanent member of the CMF international piano competition jury and from 1996 to 1998 he was a member of the Artistic comittee of Universal Arts, working in a huge campain for bringing the arts and cultures of more than eighty countries in the world closer to one another.