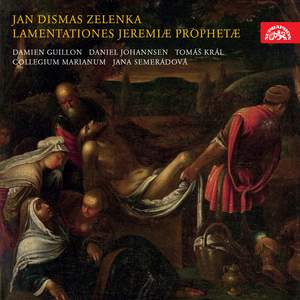 In comparison to his contemporaries, Zelenka's style will seem almost quaint, if not downright old-fashioned...Of the performances themselves, all is splendid. The balance of the period instruments... — Gramophone Magazine, December 2014 More…

Recorded in Church of Virgin Mary under the Chain, Prague, May 21, 22 and 26, 2014 Recording director Jiří Gemrot, sound engineer Aleš Dvořák.

The emotive Old Testament Book of Lamentations, ascribed to the Prophet Jeremiah, has been the subject of a number of settings since the Middle Ages, with that of Jan Dismas Zelenka occupying a significant position among them. One of his first mature works composed during his time at the Dresden court, the Lamentations, alongside the Sepolcri, written for Prague (Supraphon SU40682), and Responsories, are intended for Holy Week. In his Lamentations, performed as part of the liturgy of Tenebrae, the Service of Shadows, Zelenka succeeded in combining the contemplative aspect with a powerful dramatic charge. His penchant for unusual instrumentation is evident in, for instance, the final Lamentation (solo violin, bassoon and chalumeau, an instrument akin to today’s clarinet). Zelenka only set to music two lessons of the first Nocturn for each day; on the present recording, every third reading takes the form of Gregorian chant, as was most likely heard at the Dresden court. The renowned Collegium Marianum ensemble has materialised the very first complete recording of Zelenka’s Lamentations in the third millennium, one characterised by rigorous instrumentation, profound performance and remarkably conceived by three stellar soloists (Damien Guillon, Daniel Johannsen and Tomáš Král).

In comparison to his contemporaries, Zelenka's style will seem almost quaint, if not downright old-fashioned...Of the performances themselves, all is splendid. The balance of the period instruments is perfectly judged, with intelligent and characterful singing from all three soloists.

Zelenka’s 1722 lamentations make an appealing, varied sequence especially when performed as well as this. Semeradova’s period musicians play with grace and beauty, and the soloists...Anyone with an interest in byways of the baroque will find much to love here.