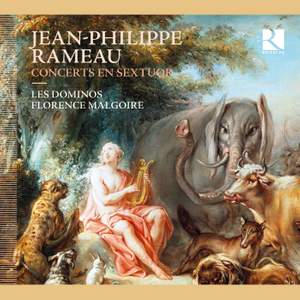 Ricercar could not help but participate in celebrating Rameau Year. It is Florence Malgoire’s ensemble LES DOMINOS that pays this tribute with a very rarely played repertoire. This is what Camille Saint-Saëns called Concerts en Sextuor in the edition of Rameau’s works that he undertook at the end of the 19th century. To carry out this monumental project, he started from a manuscript executed, it would seem, by a certain Monsieur Decroix in 1768, i.e., four years after the composer’s death. These Concerts de Monsieur Rameau are, in fact, transcriptions in six parts of the Pièces de Clavecin en Concert that Rameau had conceived at the outset from his harpsichord pieces with accompaniment by violin or flute and bass viol. This adaptation by M. Decroix is quite enigmatic, and Les Dominos give us a colourful reading of it, combining with the strings two emblematic instruments of Rameau’s orchestra: flutes and bassoon.