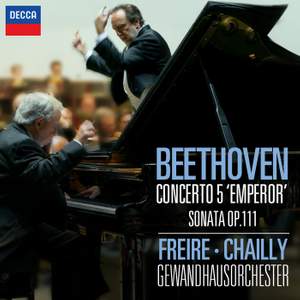 Freire loves the Gewandhaus Orchestra, and hearing them on this form one can understand why...All told it makes for a satisfying account of Beethoven's leonine work. The evident rapport between... — BBC Music Magazine, February 2015, 4 out of 5 stars More…

Released to celebrate his 70th birthday, Nelson Freire presents three landmark albums on the Decca label – the first in a brand new Beethoven Piano Concerto cycle begins with Piano Concerto No. 5, universally known as the “Emperor.”

This is the first recorded collaboration between the great Brazilian pianist and Italian maestro Riccardo Chailly and the Gewandhausorchester since their highly acclaimed Gramophone Recording of the Year, the two Brahms piano concertos, in 2007, which went on to win multiple awards.

The concerto is paired alongside the C minor Piano Sonata no. 32, the composer’s last.

This album will be simultaneously released with Radio Days in September, followed by a Chopin album including Piano Concerto No.2 and other solo gems in January 2015.

Freire loves the Gewandhaus Orchestra, and hearing them on this form one can understand why...All told it makes for a satisfying account of Beethoven's leonine work. The evident rapport between Freire and Chailly is especially evident in the superb confrontation at the climax of the first movement.

Nelson Freire and Riccardo Chailly banish the pompous air and replace it with a fresh, keen atmosphere.

Freire's Op. 111 is strong on thrusting narrative; rather vaguer when it comes to those physical and metaphysical elements which a Schnabel, an Arrau or a Pollini identify and define.

Two different styles clash here, but work themselves out. Mr. Freire is almost self-effacing at times, extreme at others: Mr. Chailly and his orchestra are lean and full of bite. The Opus 111 sonata is Mr. Freire at his best, too, in playing full of danger and, ultimately, repose.