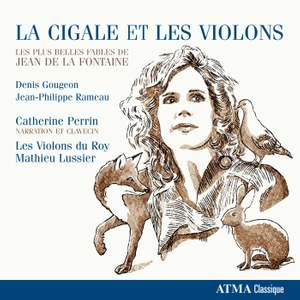 According to Catherine Perrin, who came up with the original concept for this project: “Some fables simply call for a musical setting. I found the perfect ones in Jean-Philippe Rameau’s Pièces de clavecin en concert. The great miracle-worker in this project was composer Denis Gougeon. Some of the fables — ‘The Tortoise and the Hare’, ‘The Ant and the Cricket’ — are so well known that he was able to relate them purely in music. For others, he created magnificent cinema for the ear.”

Catherine Perrin leads a very active double life as a harpsichordist and broadcaster. She performs in venues throughout Quebec with groups such as the Ensemble contemporain de Montréal, Les Violons du Roy, and I Musici de Montréal. From 2000 to 2004, she co-hosted Le Septième, a multi Gémeaux award winning TV show about film, broadcasted by Télé-Québec. Perrin presented the cultural shows On fait tous du show business and Six dans la cité for Radio-Canada television. She now hosts Médium large, a radio program on culture and society broadcast on the Ici Radio-Canada Première network.