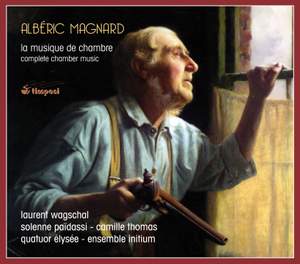 In 2014 the centenary year of his death the chamber music of Albéric Magnard is wonderfully served by this new release on Timpani. — MusicWeb International

It was just a century ago that Albéric Magnard died. Moreover, the facts that earned him ‘Died for France’ status are known: Greeting German cavalry who had entered his estate in Baron with shots from his revolver, he was gunned down in turn and his house set afire, the blaze destroying many scores.

Long ignored, Magnard has in the past few years joined the pantheon of post-Franckist composers. With Ropartz, d’Indy and others, he embodies what French music produced at the time: a combination of force and clarity, melodic and harmonic invention, and perfect mastery of orchestration. In addition, with Magnard there is the expression of total commitment and a desire to surpass himself.

In chamber music, he left a limited legacy but one of a very high level, which Timpani has entrusted to a ‘young’ team: Laurent Wagschal and the winds of the Ensemble Initium, regular artists in the Timpani catalogue, as well as two talented string players — Solenne Païdassi (a CD of French sonatas with Wagschal for the Indésens label) and Camille Thomas (nominated for the most recent ‘Victoires de la Musique’ awards) — and the Quatuor Élysée, too infrequent on disc.

Another guarantee of quality is the commentary by the leading Magnard specialist, Harry Halbreich, who lends not his pen but his voice for an additional disc, discussing works he knows better than anyone.

In 2014 the centenary year of his death the chamber music of Albéric Magnard is wonderfully served by this new release on Timpani.