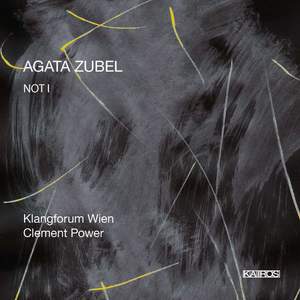 Agata Zubel: NOT I

The figure of the composer-performer is rarer today than it was in past centuries, and that of the composer-vocalist rarer still. The Polish composer and singer Agata Zubel (b.1978) is one such rarity.

er special talents were recognised when she received the top award at the 60th UNESCO International Composers’ Rostrum in May 2013 for NOT I (2010). Zubel’s experience as a performer has undoubtedly had a bearing on her understanding of vocal production and of the relationship between voice and ensemble. (Adrian Thomas)

Performed by the composer herselg, Agata Zubel is on voice, and Clement Power conducts the orchestral ensemble Klangforum Wien.