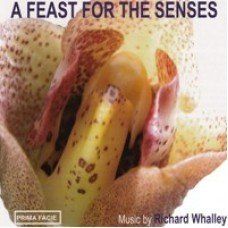 Richard Whalley: A Feast for the Senses

‘A Feast for the Senses’ features new works by composer Richard Whalley from his cello sonata, “Tachophobia”, to his “Ad Infinitum” for solo violin. Whalley explores a wide variety of sub-genres within contemporary music. Featuring the violinist Caroline Balding, Ensemble 10/10 and the Vagenza Soloists, as well as the composer himself performing the solo piano piece “Three Worlds”, this release is yet another example of the commitment by Prima Facie to both new composers and talented musicians.

The music on this album by Manchester-based composer Richard Whalley, finds much of its inspiration in sources outside of music, from Escher prints to a car chase in a Tarrantino film.

Richard Whalley lectures in composition at the University of Manchester. He was finalist in 1992 in the BBC Musician of the Year Composers Award. He studied at York University with Roger Marsh and Nicola Lefanu.