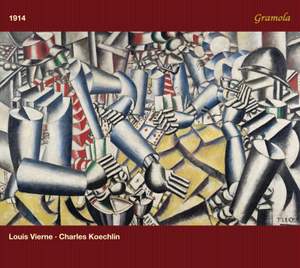 With the album 1914, the French Cultural Institute is celebrating the 100th anniversary of the outbreak of the First World War in co-operation with Gramola. Many works of the war years testify to the suffering and the power of destruction, such as the Quintet for Piano and String Quartet in C minor op. 42 (1917/18) by Louis Vierne, which he wrote in memory of his murdered son. In addition, the album also contains compositions apparently unaffected by the horrors of the time, like the Preludes for Piano op. 38 (1914/15) by Vierne or the Sonata for Violin and Piano op. 64 (1915/16) by Charles Koechlin, which is kept entirely in the Impressionist manner. You can hear Louise Chisson, violin, and Tamara Atschba, piano, as well as Matthias Adensamer, Alexander Znamensky and Christophe Pantillon with a musical commemoration of the year 1914.

The resolute performances on this release are compelling and communicate a wide range of often intense emotions. The security of group intonation is resolute with an appealing tone production from each instrument.