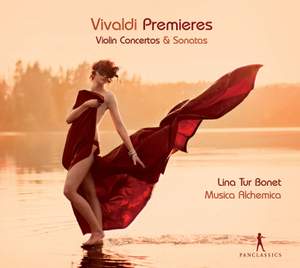 III. Aria (reconstruction of the bass part by O. Foures)

I. Andante I. Andante (reconstruction of the ritornellos by O. Foures)

Excerpt,  Vivaldi: Concerto No. 3 for Violin in C minor RV202

In view of the vast number of recordings of concertos by Antonio Vivaldi, it may come as a surprise that there are still works that have not so far been documented on recordings.

The Spanish violinist Lina Tur Bonet and the renowned Vivaldi expert Olivier Fourés have compiled a programme with such 'premieres' for the present recording. These include the so-far unrecorded Violin Concertos, RV218 and RV346, the incompletely handed-down RV771 as well as two so-called 'Graz' Sonatas, for which Fourés reconstructed the cello part in the present version.

In these works, Vivaldi shows a rather unusual aspect of himself - very diversified and variegated. Lina Tur Bonet, at the helm of her ensemble Musica Alchemica, plays with a full and round tone: with virtuoso élan in the fast movements and with dreamy lyricism in the slow passages.