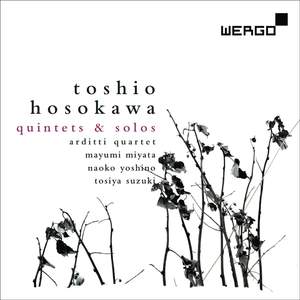 Sho virtuoso Mayumi Mayata…bends the reedy yet ethereal sonorities of that venerable Japanese mouth organ with the tact and precision of the Arditti Quartet. — The Wire, February 2015

“Music is calligraphy using sounds painted on the canvas of silence.” Toshio Hosokawa’s idea demonstrates his engagement with Far Eastern calligraphy as the most prominent connection between his compositional aesthetic and traditional Japanese arts as well as the principles of Asian philosophy. There is not a single note in the music of this Japanese composer that is not continuously modified like a brushstroke – every sound seems to be the result of inexorable change embedded in cyclic processes of birth and decay.

Whereas constant oscillation is typical of 'Landscape II', 'Landscape V' is one of Hosokawa’s most peaceful and static pieces. It was influenced by Mark Rothko’s monochromatic colour field paintings, where a relationship is created between two nearly identical colors. Here the string quartet and the Japanese mouth organ sho seem to merge to become an oscillating instrument.

Hosokawa has in his music repeatedly made reference to specific historical events and their existential repercussions. 'Threnody' is dedicated to the victims of the Tohoku earthquake and the ensuing devastating tsunami on 11 March 2011, which claimed more than 20,000 lives.

Sho virtuoso Mayumi Mayata…bends the reedy yet ethereal sonorities of that venerable Japanese mouth organ with the tact and precision of the Arditti Quartet.