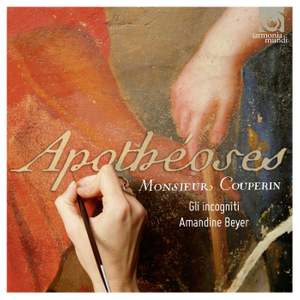 These are lively, elegant, performances that capture the subtlety of Couperin without affectation or special effects...Though hardly the only recording of these works, Gli Incogniti's should... — Gramophone Magazine, November 2014 More…

When he published his two 'Apothéoses' in memory of Corelli and Lully in 1724-25, François Couperin was asserting his desire to promote a meeting of the French and Italian styles albeit from a very Gallic point of view. The idea was to convince the French Muses that henceforth one could say sonade and cantade, ie in their own language, a strategy already pursued in the much earlier 'La Sultane' and 'La Superbe'. Far from blindly imitating his idols, Couperin takes inspiration from their styles and adapts them to his own. The result is a delight for all to share with the musicians of Gli incogniti and Amandine Beyer, whose first recording for harmonia mundi this is. The ensemble founded by Amandine Beyer in 2006 takes its name from the Accademia degli Incogniti, a musical society active in Venice in the 1630s. The choice of name was motivated by the group’s taste for the unknown in all its forms, whether this involves experimentation with sonorities, exploration of new repertory, or rediscovery of the ‘classics’. The primary aim of its approach founded on the pleasure of a ‘union of tastes’ (the goûts réunis dear to François Couperin), achieved through collective work, is to convey to its listeners a committed and cohesive vision of the music it tackles.

Gli Incogniti's first recordings, devoted to the violin concertos of Bach and Vivaldi, were immediately singled out for mention by the international press. After music by Nicola Matteis and Johann Rosenmüller, in 2013 the ensemble released a new version of Corelli’s celebrated Concerti Grossi Op.6 that was awarded a Diapason d’Or of the year (Zig-Zag Territoires).

These are lively, elegant, performances that capture the subtlety of Couperin without affectation or special effects...Though hardly the only recording of these works, Gli Incogniti's should be considered among the best.

The all-string approach works extremely well … there is no lack of fire and flare when needed. I rank their performances of La Sultane and La Superbe among the best I have heard … Gli Incogniti’s debut recording on harmonia mundi boasts a sublime recorded sound and handsome documentation … not to be missed.

The togetherness of the group and the joie de vivre of the performances is really splendid.