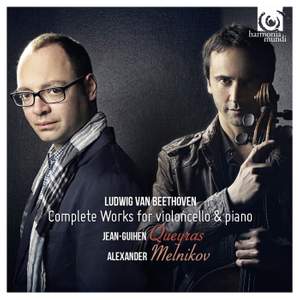 This superb recording achieves a rare balance between Melnikov's miraculous transparency and Queyras's airy, limpid elegance, and non-vibratoed purity of sound. Their approach is ideal in the... — BBC Music Magazine, Christmas 2014, 4 out of 5 stars More…

Beethoven’s works for cello and piano were written between 1796 and 1815. He effectively created the sonata for cello, with an independent piano part, in his Op.5, intended for Jean-Louis Duport and dedicated to Frederick William II of Prussia. Like the delightful variations on themes by Handel and Mozart, they represent his first-period style, as Op.69 typifies the second. The two sublime Sonatas Op.102, for their part, already herald the unprecedented stylistic freedom of the composer’s final decade.

This superb recording achieves a rare balance between Melnikov's miraculous transparency and Queyras's airy, limpid elegance, and non-vibratoed purity of sound. Their approach is ideal in the filigree exuberance of the three Variation works where Melnikov's witty sense of timing sets up a delicious teasing tension.

His cello always speaks with its own conversational voice, not as the music's curator but as its protagonist...Melnikov rewards that primary focus given to him in the variations and the early Op. 5 Sonatas with great precision of effect - colour, nuance and expression - that's not often encountered even among the best chamber music players.

a virtuoso pairing of noteworthy technical brilliance and arresting power…very highly recommended...Both accounts are superlative, and recorded sound throughout harmonia mundi’s cycle is especially pleasing and natural, with the cello’s entire register effortlessly reproduced. In sum, this proves to be a deeply rewarding Beethoven cycle from these artists, offering much in the way of novel and unexpected insight.

Queyras and Melnikov prove excellent partners throughout...Queyras is a flexible, vibrant cellist, full of the vigour and emotion of the early works, but the passion of the late works does not elude him either. This set confirms Queyras as an estimable talent with a lot to offer.

[Queyras's] partnership with the Russian pianist Alexander Melnikov is an ideal match: both are sensitive, responsive chamber musicians, alert to colour and detail, never excessive.

not to be missed...The playing here combines breadth and urgency with, for example, a touching tenderness in the simplicity of the slow introduction to the C major Sonata Op 102 No 1...It all adds up to a valuable set for admirers both of Queyras and Melnikov, and of Beethoven.

Queyras and Alexander Melnikov are dynamic and daring in the sonatas, a bit more laid back and ruminative in their approach to the variations. I find their interpretive choices sensible and just … Harmonia mundi’s sound is a thing of beauty, too, reflecting a lush, lively acoustic...yet maintaining pinpoint detail and presence. If you’re looking for a modern-instruments performance of the Beethoven chamber works with cello, this set is a very reliable choice.

Queyras and [Melnikov] present Beethoven in a way that keeps virtuosity well to the fore and is full of unexpected touches … If the unorthodox is high on your agenda, these eventful performances, where surprise whispers and caresses are an important part of the interpretative strategy, may be just what you’re looking for. For me, they trigger a real sense of wonder.