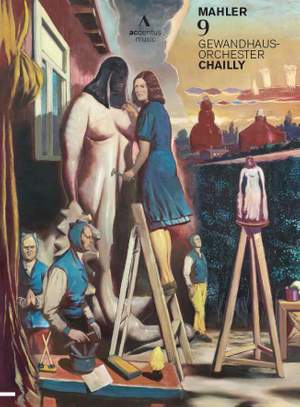 The keynote here is momentum, never forced except when it needs to feel that way...Right from the way Chailly flecks the short note of the cellos' opening arrhythmia, there's a superhuman level... — BBC Music Magazine, Christmas 2014, 4 out of 5 stars More…

Theodor W. Adorno regarded Mahler’s Symphony No. 9 as “the first work of modern music”. Adorno’s teacher, Alban Berg, saw in it “the expression of a tremendous love for this world, a longing to live in peace and to savor Nature to its depths – before the arrival of Death. For it will inevitably come.” This live recording of the composer’s last completed symphony is part of an ongoing Leipzig cycle of Mahler’s symphonies. It confirms once more the Gewandhaus Orchestra’s reputation as an exemplary ensemble for the performance of Mahler’s music. The highest level of performance culture combined with a sharply contoured, transparent, polished, and detailed manner of playing, plus infectious verve and an unmistakable sound characterized by a darkly golden color – these are qualities responsible for the Gewandhaus Orchestra’s international reputation. Since the time of Bruno Walter, the orchestra has developed over the years a deep understanding of the works of Gustav Mahler, which in their collaboration with Riccardo Chailly has been continued.

BONUS: Riccardo Chailly on Mahler 9 and in conversation with Henry‐Louis de La Grange.

The keynote here is momentum, never forced except when it needs to feel that way...Right from the way Chailly flecks the short note of the cellos' opening arrhythmia, there's a superhuman level of detail and textures, much of which sounds new to me...an interpretation as impressive, in terms of articulation and colour, as any in an ever-growing catalogue of greats.

Here we have something very special, and a good deal more than 'just another Mahler Ninth'...This Leipzig Ninth is Chailly off the leash, liberating the music in a way that is impassioned, positive, fitfully fractured and often ethereal. He flicks the Symphony's heartbeat opening into action with the most economical of gestures.