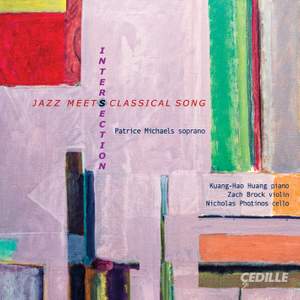 No. 2. A Flower Is a Lovesome Thing

No. 3. The Local Record Producer

No. 4. When I could Hear the Train Again

Lindberg, N: As you are

Lindberg, N: O, Mistress Mine: Shall I Compare Thee to a Summer's Day

No. 4. Come Rain or Come Shine

Acclaimed soprano Patrice Michaels, “a formidable interpretative talent” (The New Yorker), a vocalist of uncommon intellect and sophisticated wit who taps into her training as a composer, has assembled a singular collection of songs, including one she composed, which give the silvery-voiced singer and her stellar instrumental collaborators room to gently improvise and swing in surprising and always-rewarding ways.

The program ranges from jazz-influenced classical works to contemporary pieces.

INTERSECTION includes liner notes by Neil Tesser, veteran jazz critic, writer, and radio host; author of the The Playboy Guide to Jazz; and winner of the 2014 Grammy award for “Best Album Notes” for his essay for Concord Music Group’s remastered and expanded reissue of John Coltrane’s Afro Blue Impressions.