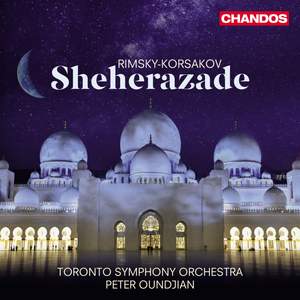 The main hero of this recording is the Toronto Symphony Orchestra's lead violinist, Jonathan Crow. His Sheherazade...is a feisty, fearless and engaging storyteller...Crow's playing is almost... — BBC Music Magazine, October 2014, 3 out of 5 stars More…

I. The Sea and Sinbad's Ship

IV. Festival at Baghdad – The Sea – The Shipwreck

This disc marks the beginning of an new recording relationship between Chandos Records and the Toronto Symphony Orchestra. Conducting this performance of Rimsky-Korsakov’s ever popular symphonic suite Sheherazade is Peter Oundjian, who this season celebrates his tenth year as Music Director of the Orchestra. After a recent performance of the work, the Toronto Star praised Oundjian and the ‘remarkably polished’ TSO for their ‘élan and dynamic punch’.

Many composers have drawn inspiration from the collection of folklore known as the Arabian Nights but none has captured the imagination so vividly as Nikolay Rimsky-Korsakov in Sheherazade, composed in 1888. In the story, Sheherazade escapes the murderous intent of her husband, the Sultan Schariar, by entertaining him with fascinating tales every evening for 1001 nights. Rimsky-Korsakov’s four movements allude to individual episodes and images from the stories in dazzling orchestral colour.

The suite opens with a stern and strident brass theme representing the bloodthirsty Sultan. A winding melody for solo violin that returns throughout the work represents the answering voice of Sheherazade. The kaleidoscopic second movement has the character of a scherzo while the third is tender and lyrical. The finale is a boisterous and exuberant carnival, calmed by the return of Sheherazade’s theme which brings the work to a serene conclusion.

The main hero of this recording is the Toronto Symphony Orchestra's lead violinist, Jonathan Crow. His Sheherazade...is a feisty, fearless and engaging storyteller...Crow's playing is almost enough to make this recording a prime version.

Certainly they play well together as an orchestral team, and the soloists come forwards with well-placed contributions in Rimsky-Korsakov's colourful score...What is so far missing is the capacity for the conductor to entrust more to the players...Nevertheless this is a good performance, scrupulously recorded.