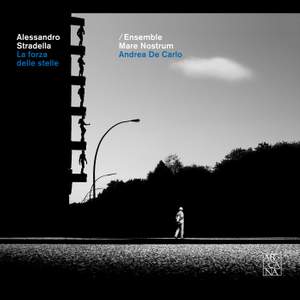 There is more to interest the ear here than there often is in 'new' discoveries and the performances far outstrip those commonly associated with such niche recordings: they provide powerful but... — Gramophone Magazine, December 2014 More…

Following four successful recordings released on the Ricercar, Alpha and Arcana labels, Rome-based Andrea De Carlo and his Ensemble Mare Nostrum continue their exploration of the Roman repertoire and inaugurate here a new series of recordings, with its own distinctive artwork, devoted to the vast and multifaceted musical heritage of the Eternal City.

Recorded in Nepi (province of Viterbo), where Alessandro Stradella was born, ‘La forza delle stelle’ (‘The power of the stars’) gives us an opportunity to sample some of the fruits of the fascinating collaboration between that exceptionally expressive Baroque composer and the Roman poet Sebastiano Baldini, under the patronage of the exiled Queen Christina of Sweden. The serenata that gives the album its title, based on a scenario by Christina, deals – as was frequently the case at that time – with the subject of love, and the power of the stars to aid or thwart it. The result is a pure delight!

This world première recording is accompanied by authoritative liner notes by Carolyn Gianturco, the author of Alessandro Stradella (1639- 1682): His Life and Music (Clarendon Press, Oxford, 1994).

There is more to interest the ear here than there often is in 'new' discoveries and the performances far outstrip those commonly associated with such niche recordings: they provide powerful but clean operatic interpretations - Raffaele Pé and Nora Tabbush are particular treats - of the extreme expressionism of these two artistic collaborators.

[his music] has energy and invention, as demonstrated by the Rome-based period ensemble Mare Nostrum, who make a speciality of music from their own eternal city. Perhaps less for the general listener than the baroque specialist, this serenata for seven voices, two ensembles and concerto grosso has its own vitality and charm.