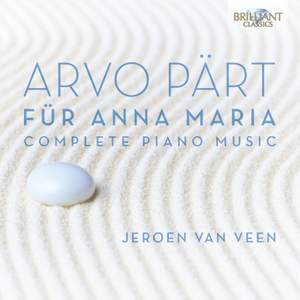 Jeroen van Veen’s recording can stand alongside the best from any source, and this set is worthy of high praise in every regard. — MusicWeb International, 5th November 2014

Pärt: Hymn to a Great City for two pianos

Estonian composer Arvo Pärt is a unique figure in the musical world. The utter simplicity of his works, inspired by his deep religious feelings, has a strange, hypnotic power over the listener. Confronted with the stark, naked and essential musical lines, one feels close to the inner truth of oneself and the other, a human bond which only music can bring.

No wonder the music of Pärt, the cult figure, reaches beyond the boundaries of traditional classical audiences. Many recordings of Pärt achieve a bestselling status.

This 2CD set contains the complete music for piano, featuring the well-known ‘Spiegel im Spiegel’, and ‘Für Alina’ (not yet as popular as ‘Für Elise’, but well on its way…).

Played by the champion of Minimal Music, Jeroen van Veen, who recorded for Brilliant Classics several collections of minimalist piano music, and the complete piano music of Philip Glass. Including new recordings of Fratres and Spiegel im Spiegel for cello and piano.

Jeroen van Veen’s recording can stand alongside the best from any source, and this set is worthy of high praise in every regard.