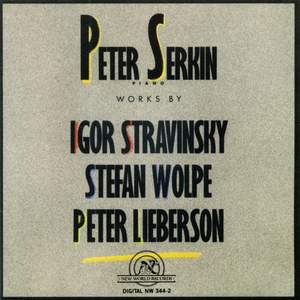 Pianist Peter Serkin is renowned for his performances and recordings of contemporary music. He has worked closely with composers such as Olivier Messiaen, Toru Takemitsu, Luciano Berio, and Peter Lieberson; he also was a founding member of the chamber group Tashi. For this disc Serkin includes two works by Igor Stravinsky (Serenade in A; Sonata); three works by Stefan Wolpe (Pastorale;"Passacaglia" from Four Studies on a Basic Row; Form IV—Broken Sequences); and Peter Lieberson's Bagatelles.

Igor Stravinsky's 1925 Serenade en La was originally composed to suit phonograph players, with each movement designed to fit the three-minute capacity of each of four ten-inch 78rpm sides. The title, Stravinsky explained, did not mean that the Serenade is in "A," rather that he had made "all the music revolve about an axis of sound which happened to be la." Stravinsky called the work a serenade, to suggest the entertainments commissioned by eighteenth-century patrons. From the same period, his Sonata (1924) consists of three movements: a toccata, an ornate Adagietto, and a Finale that is mostly a two-part invention in which the composer rejoices in the polyphonic possibilities of his instrument.

Stefan Wolpe's Pastorale was written in 1939 for the then very young pianist Jack Maxin. It is a miniature that sounds like something French from between the wars, but something French that has been unaccountably haunted by Mahler. The "Passacaglia" is the last in a set of Four Studies on Basic Row, written in 1936 but revised shortly before his death. Wolpe was seeking ways to combat what he regarded as a static quality in much twelve-tone music, and he achieved here a piece as grandly expressive and varied as it is rigorously worked. His Form IV—Broken Sequences was written for Robert Miller, a fine pianist who died of cancer at an early age. To the date July 1969 on his manuscript, Wolpe added in parentheses "in his 67th year."

Peter Lieberson wrote his Bagatelles in 1985 for a concert to benefit the All-Newton Music School. The first of the three Bagatelles, "Proclamation," is preludial and brief, full of arpeggios much varied in range and speed, liquid in harmony and tone. Its brevity is effective preparation for the wide spaces of "Spontaneous Songs," a slow movement with a wonderful sense of patience and calm. Finally, "The Dance," a dance whose energy is gentle, much of it a "one-part invention," which closes in delicious tranquility.