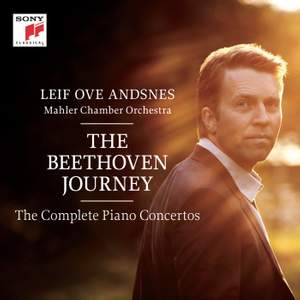 One of the pleasures of these splendid performances is the rapport between the soloist/conductor and his musicians. They play as one. Another is the clarity of texture and the variety and sensitivity... — Sunday Times, 18th January 2015 More…

2014/15 is the crowning season of the Beethoven Journey. Leif Ove Andsnes and the Mahler Chamber Orchestra have now recorded all of the Beethoven piano concertos, they will be performing the works in 16 cities across North America, Europe, and Asia. Full-cycle residencies in 2014/15 will include (in chronological order): Bonn, Lucerne, Vienna, Paris, New York, London, Shanghai. The Beethoven Journey is a four-year collaborative project between celebrated pianist Leif Ove Andsnes and the Mahler Chamber Orchestra. Together they have recorded all of the Beethoven Piano Concertos, as well as the Choral Fantasy, with Andsnes not only playing but also directing the orchestra. The series began with the live recording of the Piano Concertos 1 & 3 at the Prague Spring Festival in the historic Rudolfinum building. The second CD, Piano Concertos 2 & 4, was recorded in London in 2013, and the final album was recorded again live at the Prague Spring Festival. Leif Ove Andsnes has devoted the majority of his performing and recording activities in the last 3 years to the music of Beethoven. The first recording for the project was named iTunes’ Best Instrumental Album of 2012. The second recording enjoyed an outstanding reception from critics, with many heralding the release as one of the finest recordings of the 2 & 4 Concertos. Although Andsnes has an extensive discography “The Beethoven Journey” is his first Beethoven recording ever.

One of the pleasures of these splendid performances is the rapport between the soloist/conductor and his musicians. They play as one. Another is the clarity of texture and the variety and sensitivity of colour...Andsnes’s playing sparkles, but, however swift, never sounds hurried.

All the qualities that distinguish Andsnes’s playing – the clarity and perfect sense of weight and texture, the thoroughly musical phrasing, the immaculate manners – are obvious in every bar of the concerto here, just as what is lacking is clear, too: there’s no sense of discovery.