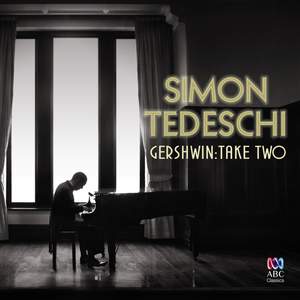 Gershwin: Do, Do, Do

Gershwin: Show Girl: Liza "All the clouds'll roll away"

My One And Only

Gershwin: Do It Again

Gershwin: Nobody But You

Who Cares? (So Long As You Care For Me)

Tedeschi captures the Gershwin repertoire perfectly; with passionate, vivacious performances that are bursting with life and romance. Harmonica legend Larry Adler(who performed with Gershwin himself), who Simon performed with extensively internationally including London's Pizza on the Park, said of him: ‘I just wish Gershwin were here – [Simon is] the best exponent of his music I have ever seen.’

The album features classic Gershwin compositions such as Embraceable You, Nice Work If You Can Get It and Let’s Call the Whole Thing Off, as well as a beautiful solo piano version of Rhapsody in Blue, alongside some less familiar but certain-to-become-favourite numbers revealing Gershwin’s extraordinary versatility and creativity, and his unfailing ability to delight.

Says Simon: ‘I wanted this album to be different. I wanted some of my favourite musicians to join me and I also felt that Gershwin had so much else to say in his illustrious career, more than the tunes we all know and love. You may not have heard of some of the pieces you will see on this track listing. They reflect the chameleon that is Gershwin – a synthesis of old country and new, as much Anton Rubinstein as Tin Pan Alley.

‘With James Morrison, we achieved a brass band sound from the Deep South that ached of nostalgia. With a solo piano take on Rhapsody in Blue, I allowed myself to explore Gershwin the master of musical textures. Working with a singer such as Sarah McKenzie is a lesson for any pianist in breathing and space. But most of all, producer Virginia Read and I just had fun! And we hope you will too.’