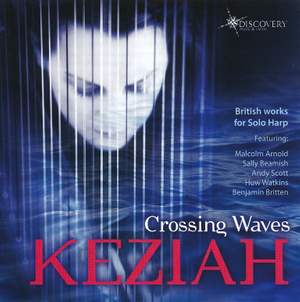 Arnold’s Fantasy for Harp Op.117 was commissioned for the harpist Osian Ellis, who was also the inspiration for Britten’s Suite for Harp.

Sally Beamish’s inspiration for Awuya is unusual in that it celebrates the medical research into the African Sleeping Sickness undertaken by Professor Keith Vickerman and was commissioned by him.

Beamish took inspiration from African drumming, petonic music for Central African harp, and a haunting lullaby sung by the tribe that was devastated by the disease.

Andy Scott composed Crossing Waves as a commission from Keziah inspired by the epic journey taken by Roz Savage who rowed solo across the Atlantic Ocean in 2005. Huw Watkins was commissioned by the Presteigne Music Festival and it was premiered in 2006. Keziah commissioned James Young to write a work to commemorate the year of 2012 which not only saw the Queen’s Diamon Jubilee but also the Olympics held in London.