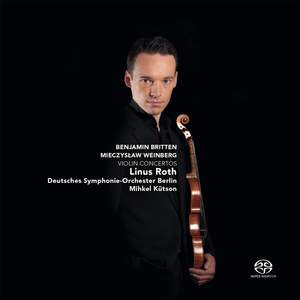 Since he won the Echo Klassik Award for his EMI debut album in 2006, Linus Roth has made a name for himself both as one of the most accomplished violinists of his generation and as a champion of forgotten music and composers. Here he couples Mieczyslaw Weinberg's Violin Concerto - his Challenge Classics recording of Weinberg's complete works for Violin and Piano has already brought him critical acclaim - with Benjamin Britten’s Violin Concerto.

Linus Roth’s talent was recognised early in his youth. When he was 12 years old he was accepted by Prof. Nicolas Chumachenco at the Music Academy Freiburg. In 1992 he won First Prize at the German national competition “Jugend musiziert”. One year later, he continued his studies with Prof. Zakhar Bron at the Music Academy Lübeck, from which he graduated in 1998. Linus Roth has been awarded several prizes, including 1st prize at the International Violin Competition Novosibirsk in 1995, 2nd prize at the International Music Competition “Joseph Szigeti” in 1997, and 1st prize at the German Music Competition, combined with the Special Prize of the Schumannhouse Bonn in 2003 for the best interpretation of a work by Schumann.

Mieczyslaw Weinberg (1919-1996) was a Soviet composer of Polish-Jewish origin. During his life Weinberg developed a strong personal and musical relationship with his compatriot Dmitri Shostakovich. Unfortunately, for much of the latter part of the last century and the early part of this one, Weinberg’s compositions have largely existed in the shadow of that of his friend. Shostakovich, however, was a great champion of his work and considered the Violin Concerto of 1959 to be a genuine masterpiece. Weinberg dedicated the piece to the great virtuoso Leonid Kogan. The concerto contains music full of affirmative power and irresistible drive from the first percussion crack of the Allegro molto to the last diminishing violin chord. Although sadly neglected in recent years this wonderful, highly virtuosic work is at last showing signs of finding the audience that it richly deserves. Benjamin Britten’s Violin Concerto, opus 15, was written in September 1939 and was the composer’s first work after he moved to America. Britten took much of the inspiration for his piece from the concerto of Alban Berg.