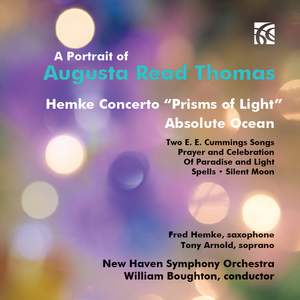 A Portrait of Augusta Read Thomas

I. the moon is hiding in her hair

II. who knows if the moon's a balloon

I. Still: Souldul and Resonant

Thomas, Augusta: Of Paradise and Light

Bold, passionate, urgent—Augusta Read Thomas writes music that is wholly and completely alive. In many of her own program notes, she includes this sentence: “I like music that is alive and jumps off the page and out of the instrument as if something big is at stake.” The first two volumes of this Augusta Read Thomas recording series focused on orchestral and chamber/piano music respectively, collecting performances by various ensembles. This third volume is something a bit different: a recording of a live 50th birthday concert presented by the New Haven (Connecticut) Symphony Orchestra under the direction of William Boughton. One of the two largescale works on the recording is also one of Thomas’s most recent (and was premiered on the concert), the dramatic Hemke Concerto, “Prisms of Light” (2014). This concerto was commissioned as a retirement gift for legendary saxophonist and pedagogue Frederick L. Hemke by many of his students past and present. This concerto is music that almost requires the listener to wear sunglasses—exploring fully the saxophone’s capacity for both lyrical, human expression and glorious, otherworldly color. The other large-scale composition is Absolute Ocean (2008), a song-cycle for soprano and orchestra with a significant obbligato harp part. Absolute Ocean is especially spare and atmospheric in texture. The ringing, resonant pluck of the harp is clearly the dominant musical image, inspiring the orchestral texture that surrounds it.

Despite using a medium size symphony scoring, the instruments are never all heard together—the result gives an audible sense of the orchestra as one large, graceful extension of the harp.