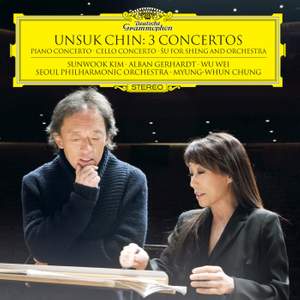 Chin is one of the best contemporary exponents of purely instrumental music drama, and these concertos provide absorbing listening...The music inevitably acquires a ritualistic aura but there... — Gramophone Magazine, November 2014 More…

Chin, U: Šu for sheng and orchestra

Solo concertos are important milestones in Unsuk Chin’s development as a creative artist: in each of them, the solo instrument’s possibilities are explored in terms of its sonorities and of the performer’s virtuosity and re-examined in a new light.

Each of the three solo instruments featured in the present release has certain historic and acoustic properties that affect the way in which it works in harmony or in conflict with the orchestra.

The one and only! This is a world premier recording of Unsuk Chin concertos with Myung-Whun Chung and the Seoul Philharmonic Orchestra.

Receiving critical acclaim for her opera Alice in Wonderland and other works, Unsuk Chin is currently the composer-in-residence for the SPO, promoting contemporary music to listeners.

The new album features soloists Alban Gerhardt for the cello concerto, Sunwook Kim for the piano concerto which is the second collaboration with the SPO after the Beethoven 5th, and Wu Wei for the Sheng concerto.

Chin is one of the best contemporary exponents of purely instrumental music drama, and these concertos provide absorbing listening...The music inevitably acquires a ritualistic aura but there is also plenty of visceral excitement in a performance that is supremely well integrated and no less well recorded. A highly successful CD.

The three works here...show how writing concertos has been a consistent thread through Chin's orchestral output...she wrote [Šu] specifically for the Berlin-based sheng-player Wu Wei, and it's his extraordinary virtuosity that allows her to create such original texture.

The music is nothing if not hyperactive, brilliantly orchestrated and atmospheric too. Try it; you may be pleasantly surprised.