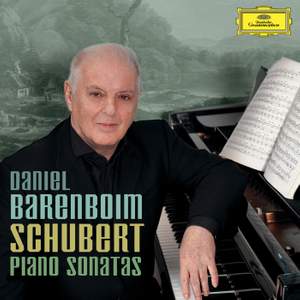 The D major Sonata, D850, can often seem too explosive, but Barenboim gives as convincing an account of it as I've heard. He is even finer in the Sonata in G major, the most lyrical of them all...There... — BBC Music Magazine, December 2014, 3 out of 5 stars More…

Daniel Barenboim is considered one of the greatest pianists and conductors of our time and may well be called a living legend.

For his efforts towards reconciliation in the Middle East as well as his musical achievements, Barenboim has been the recipient of many prizes and honours.

2014 marks a very special anniversary for this extraordinary musician: 60 years as recording artist.

To celebrate this occasion, Deutsche Grammophon and Daniel Barenboim will release a new recording of Franz Schubert’s Piano Sonatas.

The sonatas are wonderful romantic music, and after recording them, Barenboim summarizes:

“Schubert’s sonatas are a revelation. The music laughs and cries, it is at the same time sad and cheerful.”

The D major Sonata, D850, can often seem too explosive, but Barenboim gives as convincing an account of it as I've heard. He is even finer in the Sonata in G major, the most lyrical of them all...There is noble music-making here, but it is less consistent than we expect from this great artist.

Given the heroic scale of his pianism, this was always going to be an assertive, romantic Schubert – highly charged grandeur contrasted with expansive lyricism.

The first word that comes to mind, after extensive listening, is 'unflinching'. These performances don't prioritise finesse per se but they are fiercely honest.

Barenboim’s magisterial trajectory encompasses the youthful elation and romantic melancholy of the early and intermediate works, but it is in the great final triptych — the C minor, A major and B flat major sonatas, D958 to D960 — that a lifetime of pondering these transcendent masterpieces reaps most dividends.