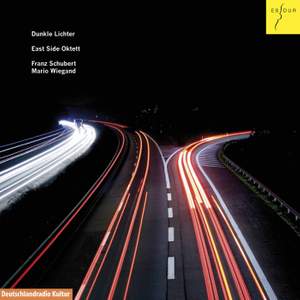 Schubert’s much-loved Octet is complemented on this recording by the premiere of a new work for the same forces - clarinet, horn, bassoon and strings - by German composer Mario Wiegand. It was commissioned especially for the musicians of Berlin’s East Side Oktett, who first came together to play the Schubert work on Deutschlandradio Kultur in 2010. Wiegand completed his octet, Dunkle Lichter (Dark Lights), in 2013.

With his charming Octet in F major of 1824, Franz Schubert created whole new worlds of expression, developing new harmonic, orchestral visions. Count Ferdinand von Troyer, steward to Archduke Rudolf and an excellent amateur clarinettist, had asked Schubert to write a work similar to Beethoven’s popular Septet, Op. 20. Schubert added a second violin to the septet, so that a string quartet plus double-bass faced a wind trio of a clarinet, bassoon and horn. Whereas Beethoven’s Septet was firmly fixed in the tradition of a classical serenade, Schubert’s Octet introduced a new, more romantic style and at nearly 60 minutes it had a symphonic dimension.

Mario Wiegand, born in Chemnitz in 1970, considers his “Dark Lights” octet to be pure chamber music. The combination of very different instruments and musical techniques such as tremoli or flageolets create light and dark tones - the dark lights. Compared to Schubert’s large work, Wiegand’s Octet is like a condensed yet delicate episode whose final sounds fade away into the ether. Wiegand’s music has won much international acclaim. He has a particular affinity for music theatre, writing The Tramway Conductor of Venice (London, 2004), Matrix Opera (Frankfurt, 2005) and Operette (Osnabrück, 2009), nominated by Opernwelt magazine as the best première of 2009.

The East Side Oktett, made up of musicians from the Berlin Radio Symphony Orchestra, was founded by the violinist Philipp Beckert as a string quartet. In 2010, at the suggestion and encouragement of their principal conductor Marek Janowski, they performed Schubert’s Octet. This performance brought the orchestra’s first-class wind soloists together with the string quartet for the first time and since then they have played regularly in this formation.