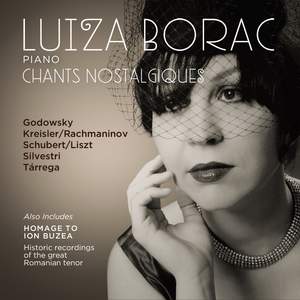 Luiza Borac has captured international accolades for her committed performances of the music of fellow Romanians George Enescu and Dinu Lipatti, as well as the prowess of her research and programming. On ‘Chants nostalgiques’ the title track is a first recording of a group of three songs composed by the legendary Romanian conductor Constantin Silvestri.

There are Liszt arrangements of some of Schubert’s most classic lieder - including Gretchen am Spinnrade, Erlkönig and Ave Maria - Rachmaninov’s take on Kreisler’s famous Liebesleid and Liebesfreud, and Luiza’s own transcription of Tárrega’s timeless guitar solo Requerdos de la Alhambra, the first ever version recorded with piano. An enticing bonus is the inclusion of previously unreleased historical recordings by the great Romanian tenor Ion Buzea, supplemented with Luiza’s modern piano thanks to present-day technology.