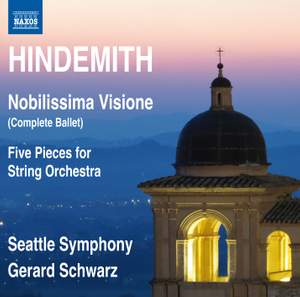 Schwarz and the Seattle Symphony prove ideal exponents, capturing the essence of the music in a searing performance, and making the Five Pieces - despite their pedagogical origin - more than... — BBC Music Magazine, October 2014 More…

A series of powerful, largely radical works in the early 1920s saw Hindemith established as Germany’s leading young composer. In 1936 he was asked by choreographer and dancer Léonide Massine to collaborate on a ballet project and Hindemith proposed scenes from the life of St Francis of Assisi. The resulting ballet, Nobilissima Visione (The Noblest Vision), is a work of lyricism, elegy and majesty. This is the first recording of the complete ballet score, not the three-movement concert suite that Hindemith later extracted.

The Five Pieces for String Orchestra is an earlier, spirited work dating from 1927.

Internationally recognised for his moving performances, innovative programming and extensive catalogue of recordings, American conductor Gerard Schwarz serves as music director of the All-Star Orchestra, music director of the Eastern Music Festival in North Carolina and Jack Benaroya conductor laureate of the Seattle Symphony. His considerable discography of nearly 350 releases showcases his collaborations with some of the world’s greatest orchestras including Philadelphia Orchestra, Czech Philharmonic, London Symphony, Orchestre National de France, and Seattle Symphony among others. In his nearly five decades as a respected classical musician and conductor, Schwarz has received hundreds of honours and accolades including Emmy Awards, Grammy® nominations, ASCAP Awards, and the Ditson Conductor’s Award.

Schwarz and the Seattle Symphony prove ideal exponents, capturing the essence of the music in a searing performance, and making the Five Pieces - despite their pedagogical origin - more than a mere filler.

what appeals here is that Schwarz and the Seattle Symphony play it as a theatre score, so the familiar episodes from the concert suite...sound quite different played by a smaller band in context...overall one is surprised by how much invention is in the music Hindemith left out of the suite.

It’s vintage Hindemith, very much in the spiritual vein of his opera Mathis der Maler, but as ever displaying his mastery of instrumentation, texture and orchestral drama. Schwarz’s Seattle players will delight Hindemithians.

Hindemith fans will know the suite he extracted from Nobilissima Visione; they will not know the 25 minutes he opted not to include...It gets a fine performance here.