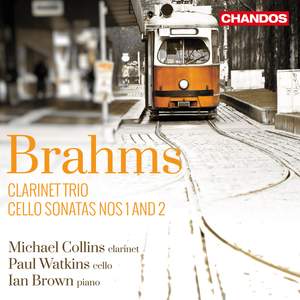 by stretching and releasing phrases without corrupting the basic pulse, lightening or darkening notes without damaging timbres, Collins shares with his colleagues an individual impulse to the... — Gramophone Magazine, September 2014 More…

Himself an accomplished player in his youth, Brahms was passionate about the cello and wrote many glorious parts for the instrument. However, he had difficulty writing his Cello Sonata No. 1, eventually destroying an Adagio to leave the three-movement work we know today. Completed in 1865, it is somewhat reserved in character, with an elaborate fugal finale that, looking backwards, pays homage to Bach. A little over twenty years later, in 1886, Brahms composed his Cello Sonata No. 2, the expansive form and extrovert character of which stand in graphic contrast to the first. The writing also shows a more adventurous approach to the cello, heard right from the outset in the leaping, passionate theme with which the first movement opens.

One of his last works, the Clarinet Trio was written after Brahms had decided to retire from composition. It was the artistry of Richard Mühlfeld that inspired him to return to composition and write a series of works for the clarinet, considered some of the supreme masterpieces in the instrument’s repertoire.

by stretching and releasing phrases without corrupting the basic pulse, lightening or darkening notes without damaging timbres, Collins shares with his colleagues an individual impulse to the music...A penetrating interpretation.

This is one of those rare discs that surprises as much as it delights...
There are many great performances of these sonatas, but I cannot recall a set of such flexibility and nuance or of such generous interplay between equals. Watkins and Brown take their time. Nothing is rushed. Everything is expressive.

The late sonata’s expansive mood and grand sonorities have made it the more popular of the two — it was a favourite of Casals. Yet the melancholy early work doesn’t deserve its comparative neglect. Nor does the Clarinet Trio, as this expressive performance by three of Britain’s finest musicians reminds us.

Collins, Watkins and Brown play as a proper, instinctive ensemble, well tailored in phrasing, unanimous in their attack and architectural finesse, and mellifluous in their shaping of Brahms’s melodic and harmonic richness.