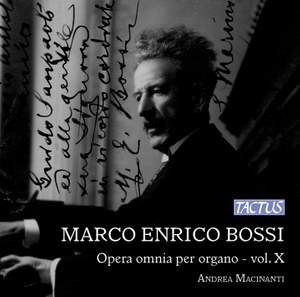 Marco Enrico Bossi (Born Salò, 1861 - died at sea between New York and Le Havre, 1925), studied at the Milan Conservatory under Polibio Fumagalli (organ), Francesco Sangalli (piano), Carlo Boniforti, Cesare Dominiceti and Amilcare Ponchielli (composition). He was appointed organist and maestro di cappella at Como Cathedral (1881-1889), taught the organ at the Naples Conservatory (1890-1895) and was director of the Conservatories and taught composition in Venice (1895-1902), Bologna (1902‑1911) and Roma (1916-1923).

Bossi was a famous performer, composer and teacher (he reorganised the syllabuses of the Conservatories), and was the first internationally famous Italian concert artist. He was conferred the highest ranks in the Kingdom, became an honorary member of the most prestigious foreign and Italian Academies, and enjoyed the esteem and friendship of great musicians and men of letters. Amongst these there were Giuseppe Verdi (who wrote from Busseto: "...it goes without saying that all your compositions are written with great mastery..."), as well as Arrigo Boito, Giacomo Puccini, Jules Massenet, Camille Saint-Saëns, Giovanni Pascoli and Gabriele D’Annunzio.

This recording is based on the critical edition of the Complete Organ Works by Marco Enrico Bossi published by Carrara (Bergamo), whose editorial committee is made up of Andrea Macinanti, Francesco Tasini, Luca Salvadori and Wijnand van de Pol. It has been chosen to use instruments built during Bossi’s lifetime by organ-builders he thought highly of, using organs built at the time the recorded pieces were composed.