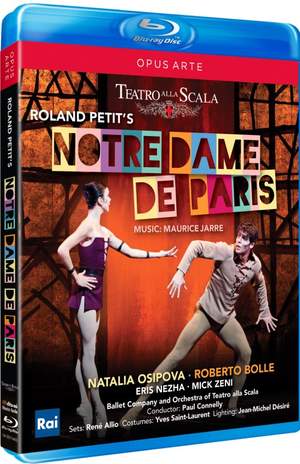 With Roland Petit's cool, cabaret-style choreography and chic costumes by Yves Saint Laurent, Notre Dame de Paris has been a modern ballet hit ever since its 1965 premiere.

Petit's deft condensation of Victor Hugo's epic and tragic novel is now renewed by two stars of our time, Roberto Bolle and Natalia Osipova: a stunning tribute to Petit's genius after his death in 2011.

'Petit's Esmeralda is a cousin of his landmark Carmen, and there is no better enfant terrible to play her today than Natalia Osipova' Financial Times

Bolle 'manages to instill Quasimodo with a tragic air that is both fierce and tender' (Herald Tribune).