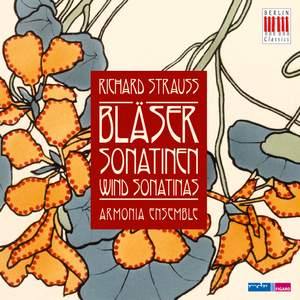 The appropriately named Armonia Ensemble are members of the Leipzig Gewandhaus Orchestra who all understand how to blend perfectly as well as take solos, and they are surely perfectly balanced... — Gramophone Magazine, Awards Issue 2014 More…

2014 is the 150th anniversary of the birth of Richard Strauss.

Wunderkind - composer of over 200 works, brilliant conductor, catalyst of the modern, perfecter of late Romanticism. The Wind Sonatas written by Strauss are amongst the most beautiful creations of the late Romantic period. Reason enough for the armonia Ensemble, comprised of leading soloists from the acclaimed Leipzig Gewandhaus Orchestra who have dedicated themselves to large-scale chamber music pieces for wind instruments, to take on these late works by the composer. Perhaps Strauss, approaching 80, was inspired by childhood memories as he returned to the wind ensemble.

His father Franz played the horn in the Munich Court Opera and the warm timbre of the instrument accompanied the boy’s earliest years. He was still a student when he composed the subtle shades of the Serenade in E Flat (1881) and Suite in B flat Op.4 (1884). Both were written for a 13 wind ensemble. Strauss picks up the same thread, two threads in fact, over 60 years later. In 1943 he writes the Sonatina No.1 in F major, giving it the title "From An Invalid’s Workshop" - a reference to a bout of influenza he had recently overcome. He extended the clarinet family, having discovered the riches of its timbres in a wind orchestra in 1900. The Sonatina reveals the full harmonic mastery and nuanced tonal colour of the mature Strauss. A year later Strauss writes Sonatina No.2 in E flat major, entitled "The Happy Workshop". Despite the tragic circumstances of war, this is strikingly cheerful music.

The appropriately named Armonia Ensemble are members of the Leipzig Gewandhaus Orchestra who all understand how to blend perfectly as well as take solos, and they are surely perfectly balanced by the recording. Altogether a most rewarding coupling.

these are escapist pieces, graceful and genial, never remotely challenging. They are presented with all the elegance they need by the Armonia Ensemble, which has the wind section of one of the greatest orchestras in Europe, the Leipzig Gewandhaus, as its core.