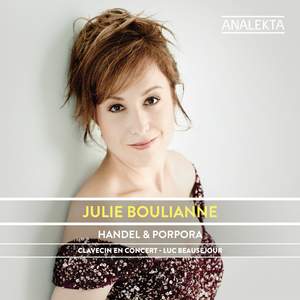 Mezzo-soprano Julie Boulianne along with Clavecin en concert and its artistic director Luc Beauséjour present an exceptionally colourful chapter in the history of music on their new recording for the Analekta label. The 9 arias that make up this album are taken from operas that were presented between 1735 and 1738, at a time when two of London's opera houses were waging a heated battle.

London, 1734: the political atmosphere between Robert Walpole's (Whig Party) supporters and opponents was explosive. There was a special kind of war on the horizon. The battle field: the Opera. A certain composer who had moved from Germany a few years earlier was seeing his popularity rise to new heights. His name: Georg Friedrich Handel. But this rise was not to be without hurdles. Nicolo Porpora, the rising star of Europe's musical atmosphere, and whose magnificent reputation spoke for itself, was called upon. Both sides confronted one another and upped the ante: on one side, the Royal Academy of Music, with Handel, favourite of the royal power; on the other side, the Opera of Nobility, established by a group of nobles who wanted to counter Handel's dominance. At the end of this long struggle, which will have incurred substantial financial losses on both sides, Handel and Porpora will nonetheless have left a few masterworks for generations to come.

From Handel, here are some arias from Serse, one of the most played operas to this day, with its most famous aria "Ombra mai fu". Are also on the program, an aria from the opera Alcina, a true masterpiece, and another from Ariodante, one of the famed composer's most inventive works. From Porpora, two of the album's pieces feature the natural flow of the opera Polifemo; an opera composed for the “star” of that era, castrato Carlo Broschi, known as Farinelli.