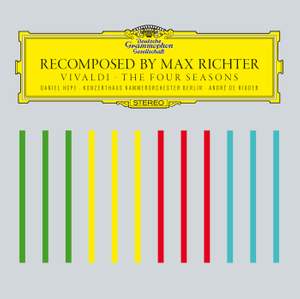 Following the success of Recomposed by Max Richter, DG will be releasing version 2 of the album in April. The new edition will come with new artwork in stunning packaging, and lots of new material, including brand new remixes, shadows and the film that was shot in Berlin in December.

The album features 5 new tracks, so called “shadows which are electronic landscapes that were made for a live performance of the work with accompanying visual material made by the Danish game designers DarkMatters. He and Max developed these pieces to intercut with the written orchestral material, and to illuminate the abstract visual world of the images.

Staged performance of the whole repertoire, shot at legendary Funkhaus Berlin Nalepastraße. (the former broadcast center of East Germany) in December 2013 with Max Richter, Daniel Hope and l’arte del mondo, which makes for some stunning visuals