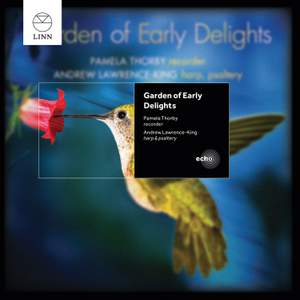 ‘Garden of Early Delights is a mixed bouquet of diverse, joyous, unusual and eloquent pieces from the Renaissance and Early Baroque periods.

Performed by Pamela Thorby on recorders and Andrew Lawrence-King on harps and psaltery, these are two virtuosic musicians unsurpassed in their respective fields.

Originally released in 2008 ‘Garden of Early Delights’ has been re-issued as part of Linn’s ECHO series which offers a second chance to enjoy the best of the label’s award-winning catalogue.

The garden of 16th and 17th century music brought forth a rich harvest of symbolism and literary associations - some of which are presented on this album.

The programme includes bursts of good humour in the treatment of van Eyck’s popular variations, sensuous melancholy from Dowland contrasting with the formality of diminutions on favourite madrigals.

‘Garden of Early Delights’ includes solo pieces from both musicians, plus works that allow them to come together and showcase their considerable skills for musical interaction.

Pamela Thorby is one of the finest established recorder players the country has produced in recent times. She is most regularly heard on Karl Jenkins’ fabulous Adiemus recordings making her possibly one of the most listened to recorder players in the world.

Andrew Lawrence-King is both a baroque-harp virtuoso and an imaginative continuo player. Travelling the world continually, he can often be heard in Jordi Savall’s group, Hesperion XX, as well as in his own ensemble, The Harp Consort, or performing solo recitals.

Pamela Thorby and Andrew Lawrence-King merge their considerable experience of other genres to deliver a unique performance on an album that brings to life music full of surprise, beauty and delight.