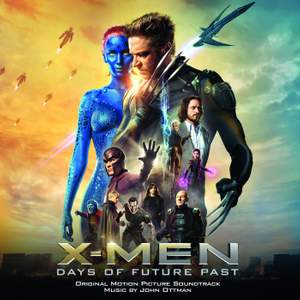 Ottman: X-Men: Days of Future Past

Ottman: I Found Them

Ottman: He Lost Everything

Ottman: How Was She?

Ottman: All Those Voices

Ottman: Do What You Were Made For

Ottman: I Have Faith in You - Goodbyes

Croce, J: Time in a Bottle

MacColl: The First Time Ever I Saw Your Face

New blockbuster film starring Hugh Jackman, Patrick Stewart, Ian McKellen, Halle Berry, Michael Fassbender & Jennifer Lawrence. Released on 'Sony Classical', the score is composed by the US producer, cutter and composer John Ottman. Ottman’s talents have bounced from the dark comedy of The Cable Guy to the nightmares of Gothika and Orphan, from the animated notes of Astro Boy to the super-powered scores of X2 and Fantastic Four. He was nominated for an Emmy Award for his score to the ABC series Fantasy Island. The right-hand man - as both composer and editor - of Bryan Singer, John Ottman has scored such iconic modern films as The Usual Suspects, X2, Superman Returns, and Valkyrie.