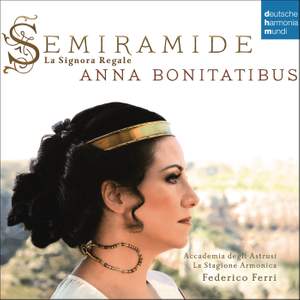 Arias & Scenes from Porpora to Rossini

There is much coloratura and here, as elsewhere, Anna Bonitatibus is spot-on...This set, sumptuously illustrated, is an absolute must-have. — Gramophone Magazine, September 2014 More…

The Italian coloratura mezzo talks to Katherine about Semiramide, the enigmatic Assyrian queen around whom her latest recording project is based.

Anna Bonitatibus (born in Potenza) is an Italian mezzo-soprano. She is one of the most wanted mezzo-sopranos of our time, admired in particular for her interpretations of roles by Rossini and Mozart.

Most of the arias and scenes are WORLD PREMIERE RECORDINGS. Some pieces are even performed for the first time after more than 150 years.

ANNA BONITATIBUS is one of the best mezzo-sopranos of our time, well trained in performing in a "historically informed" manner.

Featuring a Semiramide scene by Giacomo Meyerbeer (2014 commemorates the 150th anniversary of his death).

A very special highlight: A Semiramide aria (“Preghiera”) by Manuel Garcia. He has been the first Almaviva in Rossini's “Il Barbiere di Siviglia”. He was an amazing composer as well: he composed a Semiramide after Rossini that everybody considered lost. The score was discovered and newly edited by Anna Bonitatibus.

The first production run will be a LIMITED EDITION with an extensive booklet with many pictures and information about the music and the historical background.

There is much coloratura and here, as elsewhere, Anna Bonitatibus is spot-on...This set, sumptuously illustrated, is an absolute must-have.

Bonitatibus’s voice can sound fluttery and a loss of resonance is sometimes noticeable, especially in slow, lyrical passages, although breathiness sometimes acts as an expressive resource. But basically her sound is rich and imposing and is governed by discerning musicianship. She seems really to have immersed herself in the lore of her subject, for a regal bearing is everywhere in evidence as is an acute sense of drama.

With her pearly tone and easy coloratura, Bonitatibus sails through this demanding music.

Most of the arias are bravura numbers, and all are stylishly done, but as a whole it's a bit breathless. Technically, Bonitatibus is superb, her phrasing immaculate, her articulation crisp, but her fast, tight vibrato is an acquired taste.

A short on-location trailer for Semiramide, with music by Salieri, Jommelli and Rossini