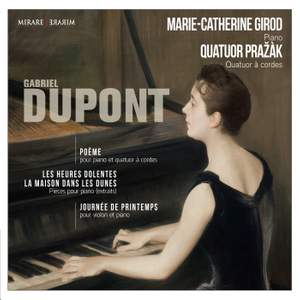 A poignant reminder of the sadly short-lived Gabriel Dupont...a supreme melodist in the Schumann-Faure mould whose haunting music deserves to be far better known. — BBC Music Magazine, August 2014, 4 out of 5 stars More…

The composer Gabriel Dupont [March 1, 1878 – August 1, 1914] may be little known today but he studied composition with Massenet, organ with Guilmant and, between 1897 and 1903, he also studied composition with Charles-Marie Widor. In 1901, while performing his military service, Dupont competed for the Prix de Rome: he won second prize, behind André Caplet but ahead of Maurice Ravel. He was also named laureate of the Sonzogno competition for his opera 'La Cabrera', which was later presented with success at La Scala and then at the Théâtre national de l'Opéra-Comique in 1905. He died aged only 36 in 1914 of tuberculosis; a last representative of French Romanticism.

Lyrical and inspired his music sings of nature: the sea, the wind, the rain.

Marie-Catherine Girod has championed unsung and forgotten repertoire of the piano for over 20 years. She was resposible for the first recording of 'The House in the dunes', in 1997, a cycle of ten pieces for the piano. This disc also features the first recording of 'Poème', for violin and piano, and two major cycles for piano quintet. Recorded in the city of the Prazak Quartet, Prague, on a Petrov piano with muted tones, perfectly suited to his melancholy universe, this album proves that Gabriel Dupont is a composer worthy of rediscovery.

A poignant reminder of the sadly short-lived Gabriel Dupont...a supreme melodist in the Schumann-Faure mould whose haunting music deserves to be far better known.

In these miniatures, as Marie-Catherine Girod shows in these affectionately turned performances of selections from both sets, Dupont expressed an attractive, limpid wistfulness.