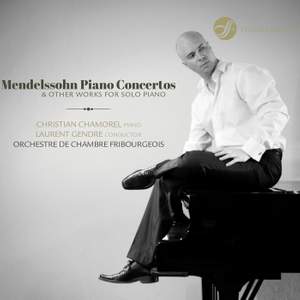 The art of Mendelssohn, the Mozart of the 19th century according to Schumann’s perspicacious yet deceptive expression, stubbornly eludes categorisation. Its lightness, transparency and elegance combine classicism and romanticism, and with its fervour, drama and exaltation define a remarkably rich, multifaceted body of work.

The multi-faceted nature of his oeuvre perhaps takes after the ever-changing nature of the composer – more so than many others – until his premature death at the age of 38. He was first Jewish, then Protestant; he was a child prodigy, a pianist, an organist and a conductor; he laid the foundations for historically informed performance; he was a painter, a writer and a key player in institutionalising music in Germany; he was a globe trotter and, of course, a composer.

The two piano concertos Mendelssohn composed when he reached his artistic maturity (at the age of 16, with the impressive String Octet op.20) are less frequently played nowadays than those of Chopin, even if they are, in many respects, probably superior.

Pianist Christian Chamorel, born in Lausanne in 1979, is remarkable for the diversity of his repertoire and his exacting artistic approach. He has been invited to play at major festivals, including the Beethoven Festival of Chicago, the Festspiele Mecklenburg-Vorpommern and Klavierfestival Ruhr in Germany, as well as French festivals such as Les Musicales du Golfe, Lisztomanias and Les Solistes des Serres d’Auteuil. His performances include concerts at the Musashino Hall, Tokyo, the Konzerthaus in Berlin, Munich’s Prinzregententheater, the Tonhalle in Zurich, the Wigmore Hall in London and the Palau de la Musica of Valencia.

An all-round musician and thorough perfectionist, Christian Chamorel is one of Switzerland’s most widely fêted pianists of his generation, as a prize-winner of many international competitions, including the Gian Battista Viotti in Vercelli, the Premio Iturbi in Valencia, the Beethoven in Vienna, the Konzertgesellschaft in Munich and the Société des Arts of Geneva. He has also been awarded many Swiss prizes, including the Yamaha, the Leenaards Foundation and Kiefer Hablitzel prizes, as well as the first prize for Virtuoso of the Future at the international competition in Crans-Montana.