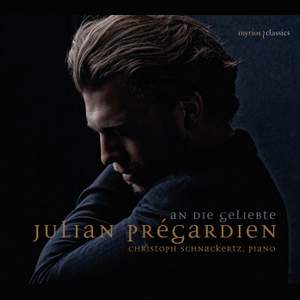 his voice [is] sweeter and silker than his father's, but characterised by that same delectable enunciation and high intelligence...It's a painstakingly researched and meticulously prepared recital...Both... — BBC Music Magazine, September 2014, 5 out of 5 stars More…

Unrequited love was the wellspring of countless songs and poems in the Romantic era. Young tenor Julian Prégardien presents his first solo lied album with a diverse programme of 19th century art songs. Certain moments are full of heartbreak, others more tongue-in cheek; Julian Prégardien invites us to join him on his exploration of the Romantic era in a quest for the (distant) beloved, from the very first song cycles by Beethoven and Weber to the height of the genre in the lieder of Wolf and Strauss.

The young German tenor Julai Prégardien has recently received a lot of attention on the operatic stage, concert platform,

as well as in chamber music. From 2009-2012 he was a permanent member of the Frankfurt Opera. In concerts he has gained an excellent reputation mainly as a Bach interpreter. This was demonstrated in the first instance in 2010 with the release of a recording of the St. Johnˆ Passion, in which he sang the Evangelist: a role he has since repeated elsewhere.

his voice [is] sweeter and silker than his father's, but characterised by that same delectable enunciation and high intelligence...It's a painstakingly researched and meticulously prepared recital...Both Pregardien and his excellent pianist Christoph Schnackertz, exquisitely capture the quicksilver, volatile spirit of Wolf's responses.

Beethoven's exquisite song-cycle immediately proclaims the 30-year-old tenor's Lieder credentials: a gentle, lyrical timbre, plus an unforced sensitivity to text (a chip off the old block here) and the cycle's oscillations between reverie and excited urgency...a notable debut from a young tenor to watch.