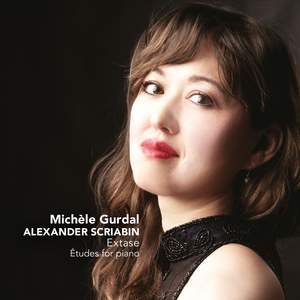 Throughout her very taxing programme, Gurdal plays with a romantic fullness and a lack of inhibition that makes you fall in love with Scriabin's early and glittering outpouring...Playing over... — Gramophone Magazine, September 2014 More…

No. 1 in C-Sharp Major, Allegro

No. 2 in F-Sharp Minor, A capriccio con forza

No. 3 in B Minor, Tempestoso

No. 4 in B Major, Piacevole

No. 9 in G-Sharp Minor, Alla Ballata

No.10 in D-Flat Major, Allegro

No. 11 in B-Flat Minor, Andante cantabile

No.12 in D-Sharp Minor, Patetico

No. 3 in F-Sharp Major, Prestissimo

No. 4 in F-Sharp Major, Andante

No. 5 in C-Sharp Minor, Affanato

No. 6 in D-Flat Major, Esaltato

No. 8 in E-Flat Major, Allegro

On her debut recording for Challenge Classics, the brilliant young Belgian pianist Michèle Gurdal performs virtually all the Etudes, including the major op 8 and op 42 sets, by the visionary Russian composer Alexander Scriabin. Michèle Gurdal was only nine years old when she played the solo part in Joseph Haydn’s Piano Concerto in G Major with the Belgian Chamber Orchestra live on Belgian television.

By the age of 17 she had already completed her studies at the Conservatoire Royal de Bruxelles in piano, chamber music and music history, receiving the coveted Diplom de Premier Prix on graduation. She also studied in the master class of Homero Francesch in Zurich and with Professor Anatol Ugorski at the University of Music in Detmold.

Russian composer Alexander Scriabin is mostly known for the exotic and visionary style of his compositions. He developed a largely atonal musical system, which he linked into his personal brand of mysticism. Scriabin was influenced by synesthesia, and associated colours with the various pitches of his atonal scale. Although he is known for orchestral works like the highly atmospheric “Poem of Ecstasy”, his piano music, including the etudes featured on this CD, are considered to be standards of the repertoire.

Throughout her very taxing programme, Gurdal plays with a romantic fullness and a lack of inhibition that makes you fall in love with Scriabin's early and glittering outpouring...Playing over a wide dynamic range, thundering and caressing with equal conviction, her lavish pedalling allows her an exceptional breadth and colour.