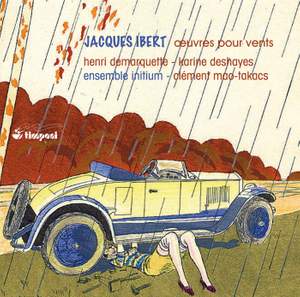 the playing is polisehd, alive and sensitive, and the recording cannot be faulted. A disc well worth having. — Gramophone Magazine, Awards Issue 2014

Ibert... In addition to Escales, Angélique, the Flute Concerto, Chansons de Don Quichotte and a few other works always mentioned, there is a rich, little-known catalogue.

This disc presents the quasi-totality of his works for winds. Along with composers such as Pierné and Gaubert, Ibert shared the gift of constantly renewed melodic invention, an outpouring of ideas that are always felicitous. These scores pour new life into this repertoire, from the Capriccio, combining winds and strings — including the violin of concert artist Alexandra Soum —, to the Concerto for Cello and 10 Wind Instruments, with its original scoring, by way of the trio, quartet and quintet for winds, and the troubling Stèles orientées (on poems by Victor Segalen) for voice and flute. This is the fourth album by the now-renowned Ensemble Initium, joined here by a few stars: the mezzo Karine Deshayes, cellist Henri Demarquette for what is doubtless one of the most masterful versions of this Concerto, and a newcomer in the person of the young conductor Clément Mao-Takacs, founder and director of the Secession Orchestra, of which this is one of the very first discs.

the playing is polisehd, alive and sensitive, and the recording cannot be faulted. A disc well worth having.